AIDS Full Form: Acquired Immunodeficiency Syndrome is the full form of AIDS. AIDS is caused by Human Immunodeficiency Virus (HIV) and is the last stage of HIV infection. It is a virus transmitted disease that causes the body to lose its natural immunity against infection.

The AIDS epidemic began in the United States in the 1980s. The World Health Organization (WHO) Trusted Source estimates more than 35 million people have died from the condition.

Effects on the immune system

HIV tends to multiply inside the host cells, destroying them. A CD4 count indicates the fitness level of one’s immune system. A CD4 count between 500-1500 indicates a healthy immune system. If the CD4 count of an HIV-infected person falls below 200, the person is likely to experience symptoms of illness. HIV could lead to stage 3 HIV or AIDS with no medical treatment.

HIV is transmitted through the exchange of certain bodily fluids with any HIV infected person, such as:

AIDS may be prevented by avoiding the transmission of the virus through the ways mentioned above.

Each of these symptoms may be related to other illnesses. The only way to ensure if one has HIV is to get tested by using either a blood or an oral specimen. 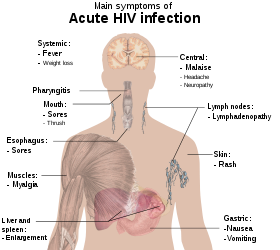 There is no cure for Acquired Immunodeficiency Syndrome (Full form of AIDS). The current antiretroviral treatment helps people living with HIV prevent its progression and live normal life spans.

With no HIV medicine, people with AIDS survive about three years. Once someone suffers from a dangerous opportunistic illness, life expectancy without treatment falls to about 1 year.

AIDS Full Form is Acquired Immunodeficiency Syndrome. It is caused by Human Immunodeficiency Virus (HIV) and is the last stage of HIV infection. AIDS is a virus transmitted disease that causes the body to lose its natural immunity against infection.

Here in this post, we have explained everything about AIDS in detail.